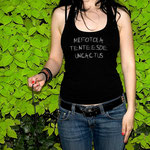 This is the image I created when invited to participate in the project "Photolatente", by Oscar Molina.

Photolatente is an artistic project begun by Oscar Molina in 1998 in order to explore questions relating to different aspects of artistic creation and involving in it a large number of people.

It uses the mechanics of photography as a procedural tool and basically focuses on that unique photochemical state known as the "latent-state image".

The project is structured around a closed and opaque envelope containing a photosensitive photographic paper impressed with an image in its latent stage; the paper is impressed by effect of light but is not developed.

Each envelope contains an original and unique image as the negative is destroyed after making the imprint.

It also includes a small leaflet with basic instructions for easy developing.